Hey family, we have this week’s update ready for you. First though, I want to talk to you about the business of Enter Shaolin. As you already know the main styles we teach are Wing Chun, Tai Chi, and Chin Na. In the future we will also be adding in the Shaolin 5 animals. We also teach Ground Fighting, Qigong, Weapons and Women’s self defense. All of these are filtered of course through the Ngo Dac Na system of energy and physics principles.

When Sifu Phu first started teaching me Wing Chun and Tai Chi, I would look for videos on YouTube to see if I could find the forms Sifu was teaching me. While I did find forms that where similar they where only similar, they weren’t identical.

When I was in my early 20’s I traveled around the United States and every state I visited I opened up the phonebook (remember those?) and looked for Kung Fu schools. I always ran into the same thing, which was the teacher explaining internal energy to me while using external force against me. Sure I got beat at the time because my internal martial art skill wasn’t nearly as advanced as it is today.

Over the years I realized that the principles he was teaching wasn’t being taught as common knowledge. Though it really should be. For the longest we (Sifu’s students) wondered where he was getting his information from because you can’t even really find it in books either.

You can watch tons of YouTube videos and you still will be hard pressed to find this martial wisdom being talked about. With that being said, Sifu didn’t invent or discover internal martial arts. He just discovered a way to teach it so that it makes sense to people.

What I didn’t know all those years ago was that what Sifu was really teaching me was Ngo Dac Na. After applying the principles he was teaching to what I already knew which was GoJu Ryu, it increased my ability. I also did some Kick Boxing while I was doing Karate. What I discovered after studying Wing Chun and Tai Chi was that ultimately style doesn’t matter at all. All that matters is understanding the energy principles and physics.

We don’t say this or that works because we are guessing. When we say what works its because we tested in real world conditions and back it by science.

A lot of people like to talk trash and talk bad about people. We don’t do that here. I’ve been teaching since 2004. I’ll share one experience with you, I had a guy who was a MMA fighter that competed locally and had really big shoulders. I will admit that I was intimidated by this guy especially because when he came to my school he already had a shiner under his eye and his energy felt aggressive.

When you teach martial arts, you are bound to come across someone who wants to hurt you. (ONLY if you are looking for it…) I’ll talk more about the laws of attraction on another day.

Anyhow, the second I touched this person I knew that I had more skill than him because he was so stiff. He ended up only being interested in trying his MMA skill on me. Which I thought was rude because I thought he was coming in because he wanted to train. Little did I know he wanted to test his skill.

All his toughness, it made him stiff as a board. Well long story short I lit him up using the principles Sifu Phu taught me. Then he wanted to try me on the ground, which at the time I didn’t ground fight, but decided to see what would happen.

The same thing happened on the ground that happened standing up, he was just stiff I easily shut him down multiple times using nothing more that my Wing Chun hand skills.

In truth I had been training at the time for 10 years and this other guy had only been training for 5 years. He was a public student I was a private student.

In that moment I had two options, curl up in a ball or man up. I remembered my training and focused on my breathing and after the first hand exchange, my fear evaporated. I realized that day that what Sifu taught me was indeed true. People rely on their muscle too much.

At the time I thought it was my Wing Chun skill that won. But it wasn’t, it was the fact that I understood how energy works better than my stronger opponent did.

So what does this have to do with the business of Enter Shaolin?

We are teaching something very special and unique to the internet world. Sije Jamie and myself come from an online marketing background and I have been a practicing martial artist since I was in the single digits of age and Jamie had a strong desire to be doing so from an early age.

In the old, old days The students of a Kwoon/Dojo would clean the school, repair the building, recruit new students, serve the Sifu/Master/Sensei his or her meals, etc.

In return some students would live at the school or get discounts on their tuition so they could continue their training. In this modern age that we live in we have the opportunity to help people in amazing ways online and therefor help more people.

Here at Enter Shaolin we don’t just look at you as customers paying for our online business. We see you as part of our martial art family. You are our brothers and sisters. Just like any good family we support each other.

Maybe training with us here at Enter Shaolin stretches your finances and we do understand that. Because we know what it feels like to make every penny count, especially Sije Jamie. That’s why we have an affiliate program, so you can earn while you learn.

You can share your affiliate link on a blog, forums, in your social media, even in your neighborhood and people you meet face to face. You can start your own training club on meetup.com, etc. We have have a program where you can start getting certified in Ngo Dac Na as well to help you further down the line if martial arts is what you want to do for the rest of your life.

If you do a google search for Ngo Dac Na you will find that you can only find it at one place.

As an online marketer we call Ngo Dac Na a U.S.P. (Unique Selling Point). Another words you can’t find it just anywhere. Affiliate marketing is a great way to make some extra cha ching. What makes affiliate marketing hard though is when you are competing for business against 100,000 affiliates selling the same stuff you are trying sell.

Currently, if you become an affiliate for Enter Shaolin, there are only 41 people around the world that you would have to compete against for business. (As an affiliate marketer myself I instantly recognize the opportunity that is here for savvy affiliates.)

We don’t focus on promoting our affiliate program because we are busy creating amazing content for you everyday. Just because we aren’t vocally promoting, doesn’t mean it’s not available to you. If you are interested in earning some extra cha ching or even working toward turning it into a full time income for you. You can sign up for it here.

As you know as far as the “Business” of Enter Shaolin is concerned, Sije Jamie and myself handle all the video editing, member support, graphics, writing, editing, marketing, etc. and day to day website maintenance. We also spend time engaging with our followers on Facebook, Youtube and other social networks. We also spend our time masterminding on how to make Enter Shaolin even better for you.

What does this all mean? It means as we get more time we are going to focus on teaching our affiliates “how” to sell stuff online successfully.

This fall we are starting up webinars and more training for our affiliate ambassador team. Currently there is already a training library with the basics on how to market available to you when you signup, so if you are new to this concept, we got you covered.

We can teach all this to you because we have been full time online markers for many years now. Personally I’ve earned 6 figures online selling affiliate programs in the past. This means I know how to get traffic and convince people to buy stuff online. Everything I learned about Marketing online since 2002 has been poured into getting Enter Shaolin traffic and sales. Sije Jamie has been working from home full-time since 2004, she knows attraction marketing, graphic design, copywriting, social marketing and many free ways to get things going like no one I know. She’s helped her clients become 6-figure earners and maintain that status.

Between the both of us we really can help you achieve freedom via online marketing. Whether as an affiliate for us, someone else or doing your own thing.

Like all things, we just need the time to focus on it and we are working on that and feel the time is getting closer to be able to do so. We quit everything, all the programs, all the affiliate stuff, Jamie quit her freelancing, all to be able to put all of our skills into our passion which you are seeing unfold before your very eyes.

If you are already an affiliate of ours and you want some help with selling Enter Shaolin we would be more than glad to mastermind with you via a video conference and help you create a marketing plan that works for you. Email us here and let us know and we will get you taken care of.

Thank you for giving us the opportunity to serve you as a member of our family, we look forward to what the future brings.

Before you get to your training, check out this week’s webinar: 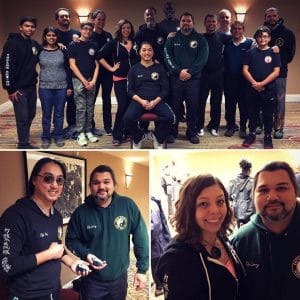 P.S. If you want to signup to become an affiliate, you can do so here: www.entershaolin.com/affiliate

Sifu Larry has been training in martial arts since he was 5. In his early years his father influenced his martial arts training. He taught him the basics of self defense, guile, military tactics, Judo and Jiu Jitsu. At age 7 his he was enrolled in Goju-Ryu which he trained in until he was 16. He took sometime off, but when he came back he decided he was never quitting martial arts again and at the age of 19 his thoughts on what martial arts was and was not got flipped when he started training with Sifu Phu and learning internal martial arts. Needless to say, he's a lifer and a guy you want on your side.
Tweet
Pin
Share5
5 Shares