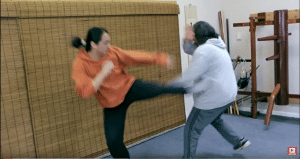 One of the most important elements of fighting is understanding your fighting range. Engaging with someone can be difficult when they keep stepping away from you. You won’t see this happen much in street fight where one person is gunning for another person.

You will however see this happen in ring/cage fights all the time.

On the flip side of this, understanding how to shuffle step can aid you in stepping just outside of your opponents range of attack or it will allow you to step in at just the right moment.

This is also good for when you are setting up your opponent for a counter attack.

It’s important to remember that when you are countering that you don’t over commit your strikes.

In this video Sifu is discussing how to counter a person who is stepping in and out of range with a jab.

You will also learn a technique where you can use a  feign attack on your opponent to confuse them and make it easier for you to counter attack.

Keep in mind this is just one scenario that can happen.

…Give the lesson a try let us know how it went

Sifu Larry has been training in martial arts since he was 5. In his early years his father influenced his martial arts training. He taught him the basics of self defense, guile, military tactics, Judo and Jiu Jitsu. At age 7 his he was enrolled in Goju-Ryu which he trained in until he was 16. He took sometime off, but when he came back he decided he was never quitting martial arts again and at the age of 19 his thoughts on what martial arts was and was not got flipped when he started training with Sifu Phu and learning internal martial arts. Needless to say, he's a lifer and a guy you want on your side.
Tweet
Pin1
Share14
15 Shares