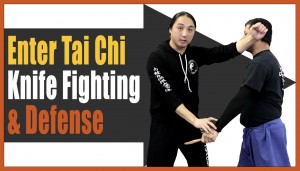 Let’s be real, it’s never a fun thing to find yourself in a situation where knife fighting and knife defense come into play. The reality though is that every good self defense curriculum should have some type of knife defense training in it.

We shot this video because Sensei David Melker wanted to show how the Ngo Dac Na way of handling a knife attack is much different than many videos out there on YouTube and other video sharing sites.

Many times what you see is a lot of moves that show knife disarms and knife defenses that look good, however, in reality, the technique only works, because the guy is just sitting there with his arm out. Let’s be honest, if a person is trying to stab you with a knife… Do you think they are just going to keep their arm out there?

The answer is… Of course not.

The question you should ask yourself is what do you do if the person is continually stabbing at you and they are not a compliant partner? After all they are trying to hurt you, not be your training buddy.

Why?
It’s not because the knife got more dangerous, it’s because your opponent has. That is why our mental state isn’t chase the knife, our goal is to damage the opponent. To do this, we strike the person which is the weapon fast and efficiently with weapon strikes.

First keep in mind that you want to go 1 to 1 or 2 to 2. Meaning that you don’t want to make 2 moves if your opponent is only making 1 move. The reason is that if you are taking 3 moves for every stab that is coming towards you, then you are taking too long to counter. Basically if he/she stabs at us. we go 1 to 1; they attack we attack.

That’s why we do techniques like weapon striking techniques to handle knives. These are techniques that damage the opponent through their limbs. You can weapon strike their arms, legs, knees, elbows, etc.

We damage the arm with that type of strike, because if we can damage the arm, then they can’t hold the weapon. If you watched the whole video you seen Sifu Phu demonstrate weapon striking. It’s a very effective technique in a knife fighting situation. BladeOps.com Knives is a great option to finding your defense blade.

This is just a primer to what we do, Enter Shaolin members can check out our hour long knife defense webinar here.