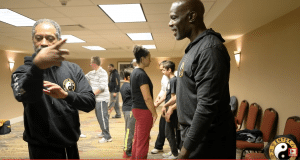 Sifu Phu has been doing a yearly seminar for the Eastern U.S.A. International Martial Arts Association for over 8 years now. Enter Shaolin started coming with Sifu our first year which was 2014. Last year we decided not only to accompany Sifu Phu, but to also host our own Kung Fu seminar during that weekend so our peeps could get more training during their stay.

In case you missed the previous years, here is some more goodies for you.

This year (2016) martial arts seminar was part 2 of last years seminar. I believe there are over 1000 people from around the world that come to this event every year in Pittsburgh, PA.

Sifu Phu gets to teach for about 45 minutes at the main conference. To help our fans and family learn more, we also host our own 7 hour seminar spread over 2 days. Enter Shaolin members get access to the full video recordings during the seminars which is many hours of great training.

Here is a clip from last years NDN seminar

Enter Shaolin was at the E.U.S.A.I.M.A.A. in 2014, however we didn’t host our own seminar that year. We just filmed Sifu’s conference presentation. 🙂

Sifu Phu has said that he can get out of a choke hold. When he says that, there is always someone who believes they can choke him out.

Here is a quick clip from 2014 where someone tried to choke him out. It’s important to understand that it wasn’t someone who didn’t know how to do a chokehold. This was done by another martial artist who has been training for many moons.

The reason why I mentioned it is because a lot of people watch our videos and they say to themselves, he couldn’t stop me from doing it. Believe it or not we hear that all the time and after the person tries it they are amazed that they couldn’t do it.

There are other variables that goes into being able to choke someone out. Sifu Phu doesn’t say he can’t be choked. The reality is not many people understand how energy works meaning that for every technique there is a counter and for every counter there is another counter and so on.

This means that it simply comes down to who has more skill.

Maybe you have heard about it already maybe not. If you haven’t heard we created a membership called Enter Shaolin Lite. The good news is we are able to bring you our Ngo Dac Na 101 course to you for $9.97 a month. It’s a great way to get started with Ngo Dac Na and our training. It doesn’t matter whether you are new to martial arts or been going at it for years, there is always something to learn and grow from.  You can join and get started today here.

As an added bonus, we have now given all Lite members access to our full webinar and seminar training library too! This will give you even more hours of training and education.

Get started training with us today! Click This Link To Get Started

Sifu Larry has been training in martial arts since he was 5. In his early years his father influenced his martial arts training. He taught him the basics of self defense, guile, military tactics, Judo and Jiu Jitsu. At age 7 his he was enrolled in Goju-Ryu which he trained in until he was 16. He took sometime off, but when he came back he decided he was never quitting martial arts again and at the age of 19 his thoughts on what martial arts was and was not got flipped when he started training with Sifu Phu and learning internal martial arts. Needless to say, he's a lifer and a guy you want on your side.
Tweet
Pin3
Share3
6 Shares