You are here: Home / Kung Fu Lessons Online / Understand What Locking Is – A Look At The Wrist Lock 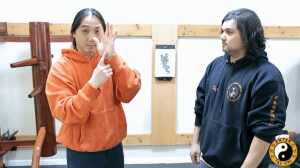 What Is Locking? Basically it’s the manipulating of joints. The idea is to get him past what his natural flexibility is, where the natural anatomical limits of the human body can go, and we bring it beyond it.

Henceforth we lock the joint together.

We are going to talk about the first wrist lock it is a very common one called the reverse lock. The reverse wrist lock is the taken of his body to go backwards to the wrist. Understand there are 2 points that you want to control in the wrist.

The third point is called the fulcrum point or called the pivoting point. You need to have that in order to create the torque. Watch the video to get the rest of this lesson.

Sifu Larry has been training in martial arts since he was 5. In his early years his father influenced his martial arts training. He taught him the basics of self defense, guile, military tactics, Judo and Jiu Jitsu. At age 7 his he was enrolled in Goju-Ryu which he trained in until he was 16. He took sometime off, but when he came back he decided he was never quitting martial arts again and at the age of 19 his thoughts on what martial arts was and was not got flipped when he started training with Sifu Phu and learning internal martial arts. Needless to say, he's a lifer and a guy you want on your side.
Tweet
Pin5
Share10
15 Shares