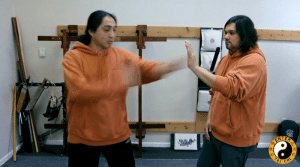 Tendons allow you to do fast jerky motions. Muscles are used to over come forces, tendons are used to hold and snap. So focus on your tendons when you want to get physically faster.

How do you get faster? You get faster through technique. You get faster by cutting away unwanted distance. The way that you want to develop speed is through the wrist. You don’t want to throw your punch from your shoulders.

A lot of styles want you to throw from the body and throw from the shoulders and that’s great if you want to get a lot of power and force. However to get the speed you want it through the wrist.

It’s good to note that in a street fight it’s important to maximize the amount of damage you can do. The equalizer when it comes to delivering power in your strikes is to deliver them as quickly and accurately as possible. The faster, the more accurate the faster you can end a dangerous situation. This is why

We would love to hear how you do with this drill. Leave us a comment below and let us know.