You are here: Home / Kung Fu Lessons Online / How To Defend Against A High Kick 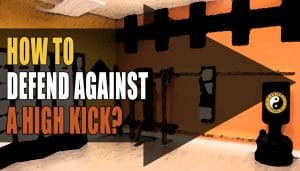 When blocking a high kick you want to avoid a direct impact hit. We like to use our arms to block high kicks.  We have a saying “Pop It, Don’t Stop It”. The reason is because a direct impact kick could break our arms. This could happen when you intercept a high kick direct and hold. This is why we like to get under the kick and rotate our wrist while rising  so that we can pop the kick up a little bit which takes away the direct impact of the kick.

Another thing that you can do is take a small step into the direction in which the person is kicking while applying the same type of technique this also dissipates the power of the kick.

Another good thing to do is be aware of the distance between you and your opponent. There are basically three ranges of engagement in combat when it comes to hand to hand. Distance which is legs distance, to give you an idea do a front kick and see how far your leg goes that’s your long range distance. Keep in my mind your opponent my have more distance than you. There is also close quarter range, this range includes things like straight punches, hook punches and even clinching. Finally there is close quarter to ground fighting, which is anywhere from the clinching area all the way to the ground.

It’s a good idea to understand all the ranges and to be able to competently defend yourself in all ranges. For example in a real fight you won’t see to many high kicks thrown. Most likely you will someone may throw a high kick, not land it effectively and continue to charge in where it goes close quarter then eventually wrapped up and taken to the ground.

This whole exchange could happen in a matter of seconds. With that said there are a lot of variables that can change the situation in an instant. So the best rule of thumb is be ready to accept whatever occurs and feel your way through it.

Because you have to be ready for everything, here at Enter Shaolin we teach you to handle all the different fighting ranges you may find yourself in. Understanding what to do and when to do as well as why you are doing it goes a long way in effectively defending yourself.

What are some of the ways you use to defend against a high kick?