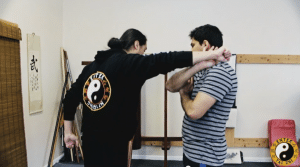 In this video you are going to see a Don Chi Sau training exercise called Cross Arm Don Chi Sau. What this is to teach is basically develop structural integrity so he can’t compromise under pressure. But what happens when somebodies force is greater than your structural integrity? He has to learn how to release it. This is what this drill is for:

To release pressure that is greater than your ability to maintain your structure. This drill is to teach you how to feel pressure and when someone puts greater pressure and forces you are going to learn how to release it. 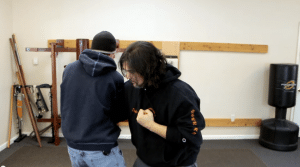 As he learns to release he is also going to learn how to strike.  Learning Don Chi Sau is a team effort. Basically it’s a partner drill. You can’t practice this alone. While one person is practicing one aspect of the drill. Your partner is learning another aspect of it.

It bridges the gap between just playing a game of hands, ( for us that means we use the the tools we learned so far like strikes, deflections, parries and locks and connecting them to footwork). Once you get this far into your training it’s time to work on Don Chi Sau, this will take you to Chi Sau or sao both spellings of the word is correct.

Chi Sao or Sticky Hands incorporates all that you have learned into a more free play enviroment. Another words it can be as passive or aggressive as you and your partner agree on.

Check out more of our Kung Fu Lessons Online

Sifu Larry has been training in martial arts since he was 5. In his early years his father influenced his martial arts training. He taught him the basics of self defense, guile, military tactics, Judo and Jiu Jitsu. At age 7 his he was enrolled in Goju-Ryu which he trained in until he was 16. He took sometime off, but when he came back he decided he was never quitting martial arts again and at the age of 19 his thoughts on what martial arts was and was not got flipped when he started training with Sifu Phu and learning internal martial arts. Needless to say, he's a lifer and a guy you want on your side.
Tweet
Pin2
Share
2 Shares