You are here: Home / Kung Fu Training / Why Doesn’t My Cat Stance Work?

Sije Jamie: Dominic has sent us over question. He says,

Can you talk about rooting in the cat stance I’m easily knocked over with all weight on the back leg when being pushed from the front. How would you deal with a push from the front in a cat stance? 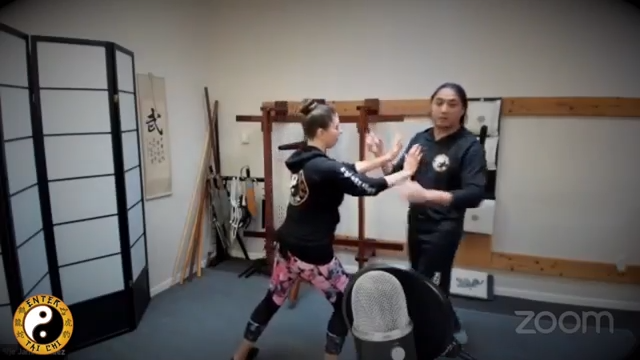 Sifu Phu: Okay. Um, natural instinct to go to a bow and arrow. You should not stay in a cat stance unless you’re very good at controlling the image in your hands. The reason why you’re getting pushed backwards easily, it’s not because of the root, it’s your lack of control. So if you’re trying not to control them, basically just withstanding the force, you need to be in a bow and arrow.

So if you’re trying to get, let’s say somebody is pushing me and I’m in a Cat, it’s because my hands don’t know how to deal with it. Naturally, if you want to withstand the pressure, not necessarily controlling the pressure. She’s pushing me. And I want to go into a bow and arrow, that gives me a stronger stance.

Sije Jamie: okay, sorry. Microphone is like wigging out when we moved it. So hopefully you guys can hear us again. 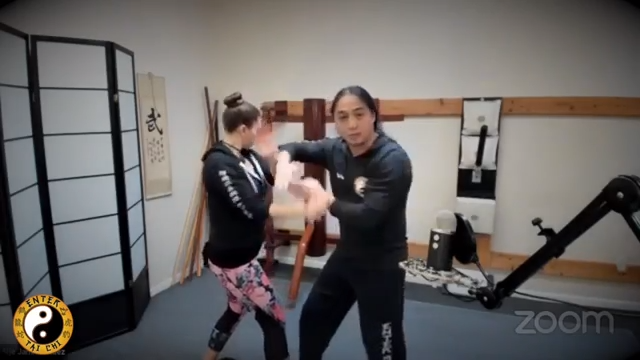 If you take a bow and arrow , it gives you the chance to withstand the pressure. But still you, you still want to use your hands and control. Otherwise if you put too much pressure, it can be pulled. So you don’t want to do something where you’re going against the force.

The goal is you have to learn how to control the pressure within your arms. Just remember in the end, when we connect, our hands connect to the opponent most of the time and our feet, I’m talking about standing not on the ground.

Sifu Phu: Uh, but your feet are designed to connect to the ground and your hands are designed to connect to the opponent. So the idea is get the energy from the ground to control the opponents to the arms. So you really the, the, the lack of failure from most people. It’s in the arm control. Even take a bow and Arrow stance. If your arm controls not well, you can be pulled and you can still be pushed.

It just allows you to take a higher stress level of pressure, a lot of pressure, more, uh, a bow, then a cat. But still, if your arm’s not there, you’re still gonna fail. Okay In the end, you have to learn how to deal with your arms because that’s what they’re pushing you. They’re pushing you through their arms and their body. They’re using the likes of driving up their body into their hands and they’re trying to take you backwards through that.

If they’re using their hands and trying to push and fight and combat for your hands, you have to deal with the hands that way. So it’s very important that your hands learn how to control it. The stances don’t really matter in terms of whether you’re in a cat or horse or a bow what matters is learning how to compensate the energy pressure between the hands to the feet. That’s the more important.

that was what I suspected and perfect. Thank you.