You are here: Home / Kung Fu Lessons Online / Why You Can Effectively Learn Kung Fu Online Without Having Face To Face Lessons

Many moons ago a fellow student left Sifu’s school because he felt he wasn’t learning quickly enough. It’s something we see a lot, people trying to rush through their perceived time limits and ideals of what mastering a technique really means. This student thought maybe Sifu was holding out on the ‘real secrets of kung fu’ and got frustrated with what he thought was slow progression.

He found another local school that promised to teach him the techniques and forms faster. Some time went by and then one day I ran into him at a local deli. He asked how I was doing and what I had learned so far. While I was still working on Sil Lum Tao, he had moved on to Chum Kiu and some Bil Gee. He asked if I would like to train with him, and not being the type to pass up an opportunity to train with another partner, I agreed.

When he came over to my house to train, I realized he had something else in mind.

At that time I didn’t really know how to do Chi Sao very well. I may have only begun actually training in Jip Sao Jao Sao, which is sensitivity training to prepare you for Chi Sao.

However, I did play a game called hands, which is sort of a basic version of Chi Sao. The interesting thing here is that from a technical standpoint my friend did indeed know more than me and had way more techniques he could call on, which is why he thought when we met at the deli, he had me.

Sifu Phu only advanced me when he felt I understood the lesson. And some lessons last for years… And that’s what people do not get, you won’t get this stuff over night and you will continually be perfecting what you learn if you train right.

This is Kung Fu (hard work) not some McDojo. In other words I spent a lot of time cycle punching and doing pak drills to learn muscle memory, etc. Meanwhile the guy that left got what he thought he wanted… He learned more techniques and advanced much faster than me or so he thought.

What I came to realize is that learning faster, isn’t always better. When he came over, it became clear he was there to test his new skills on me, not to actually train with me. When we touched hands, instantly his new skills crumbled beneath mine and I overwhelmed him with cycle punches and basic combos from Sil Lum Tao. Needless to say he was floored, and I was a bit too to be honest. 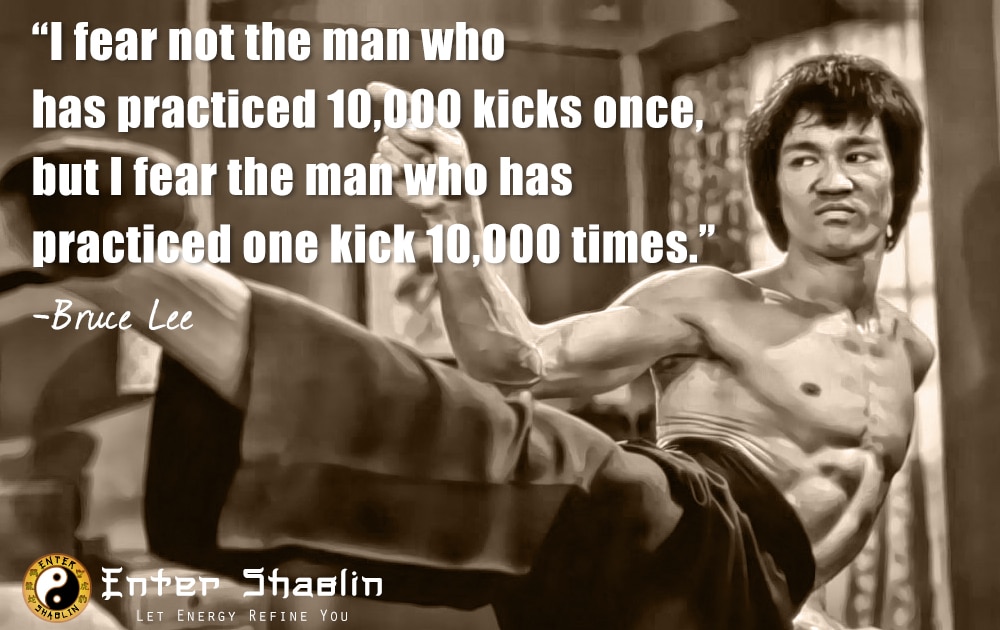 That day my friend realized he wasn’t as good as he thought he was and I realized I was better than I thought. Both of us learned a lot about ourselves that day. Long story short, we became good friends and trained together for many years. And yes, he even came back to Sifu’s school! 🙂

Why You CAN Really Learn Kung Fu Online

The reason why I wanted to share that story with you was because it illustrates the point that you don’t have to know a lot to be a competent martial artist. Nor do you need to learn a whole lot of stuff. You simply need to learn the basic fundamental principles, then practice them consistently and finally test it against a resisting opponent.

(Note: This doesn’t mean practice it 5 times and then see if it works), this means once you have practice under different conditions and when you feel competent ask your training partner to increase the speed or power depending on what you are working on at the time.

Psst… Your training partner can be literally anyone… A wife, husband, son, daughter, brother, sister, mother, father, uncle, aunt, your next door neighbor and even a pet can help you train in some scenarios! The point is, finding a training partner is only as hard as you make it. 😉

Consistency is king here. Whether you are training daily or 3 times a week. If you can train an hour at a time, then do so, 30 minutes 2x  day, no problem… Can’t fit that in? Then do short chunks of 10-15 minute training several times throughout the day. Whatever the schedule, create it and stick to it. As we like to say… If there is a will, there is a way, so make it happen!

You might have heard Sifu Phu say, “Techniques don’t fail, if it’s not working, it is you that failed the technique.” Some people might think he’s joking when he says that, however I assure you he is serious and for real. What we do here at Enter Shaolin is teach you bite size lessons that you can practice at home many with or without a partner, as much as you need and as much as you should. Every time you think you mastered a form or technique… Ask yourself if you have practiced it, 10,000 times yet or not?

If you haven’t, then you haven’t mastered it yet. Similarly, if you think the technique is failing you and you haven’t practiced it that many times… Well, who really failed who?

If you want to become good at Kung Fu, it requires you to make a commitment to train on a regular basis, to find the time, to get over any excuses you may have and to realize to master a technique requires more time in than most are willing to admit.

Now don’t get me wrong, that doesn’t mean you won’t have a technique work for you if you haven’t practiced it 10,000 times, because I know I hadn’t practiced Sil Lum Tao that many times when I was able to beat my friend at a friendly hand of games all those years ago.

The fact is if you train consistently, you are constantly improving and becoming better to handle the average Joe you might run into on the streets that has no martial arts skill at all or the poor people fed the McDojo lies. You can often get techniques to work right away when you try them, but that doesn’t mean you don’t need to practice that technique to make it second nature and build that muscle memory. 😉

If you have learned from our YouTube videos, then you will absolutely be able to learn from our Members only videos which are more extensive and even more detailed to help you in your Kung Fu journey.

The key to good martial arts development is learning the guiding principles behind the movements and techniques. It’s one thing to memorize a technique, it’s another to know the why it works and how it works. We teach you why what we do works and we show you how it works too.

Here is an example of what I am talking about:

Did you learn anything from the above video? It’s just a few minutes of a 2 day seminar we held in Pittsburgh, Pa this past year. Our members actually have the entire seminar in the members area. We have over 400 plus videos of pure training and counting ready for you inside, when you join… Each lesson can be practiced and should be practiced thousands of times.

What about this video, did you pick anything up here? Let me know in the comments below this post.

I’m sure by now that you can see just how simple it can be to learn kung fu online.

Who Should Learn Kung Fu Online?

Maybe you live in an area where there aren’t any local schools/clubs available for you train at, or you can’t find what you are searching for locally like Jamie. Or maybe you can’t afford to train locally… After all the average monthly cost is around $155 a month to just go to public classes. In either case you have found your solution. It’s less than $1.65 a day to get started training with us here at Enter Shaolin.

It could be that you are already training and you simply want to further your knowledge in martial arts and further enhance what you already do. We have family members from practically every martial art style that is available and as many if not more areas of the world. Because we teach you how energy works with your body, and energy + physics are universal regardless of style. We will teach you the proper body mechanics you need to learn in order to be effective whenever you are ready. 🙂

If you are already learning how energy works with your body, that is great! Congratulations, you are one of the fortunate ones. Sadly, there are literally thousands of martial art schools around the world that for whatever reason don’t know how energy works. They don’t know the how to’s or why’s. They simply teach what they where taught and rinse and repeat. Most are training in external martial arts, and think that internal martial arts is too mystical when in reality it is not.

I even traveled the U.S. to find other schools, because while I love Sifu Phu, I am not in love with where I live. I thought maybe he was just talking smack, but after traveling the U.S. I realized indeed this knowledge he shares cannot be found just anywhere.

Which is one of the reasons we created Enter Shaolin, so people around the world like yourself, could have an opportunity to learn from Sifu Phu Ngo too.

I know there are incredible teachers out there in the world. I also know that they are few and far between.

You deserve to know the truth of internal martial arts. Because of the internet you have the opportunity to learn real Kung Fu regardless of where in the world you are. Not the watered down stuff, not the mystical mumbo jumbo crap either.

The best way to learn of course is face to face more specifically through private lessons. I know because I was a private student and there is a drastic difference in training public vs. private as you are able to get much more one-on-one training. I preferred learning that way, however it was very expensive and I had to make a lot of sacrifices along the way to be able to do it. However, I realized that was the only way at the time.

But now there is another way, Enter Shaolin, is like having a Sifu Phu Ngo in your back pocket, a proverbially encyclopedia of his knowledge on the go. If I would have had this while training in person too, it would have been a game changer, no longer forgetting what was covered in my private lesson, etc.

One of the most frequent questions we get here is: I would love to train with you guys online but I don’t have anyone at home to practice with… Can I still learn?

Another Question: Is it possible to learn without person to person teaching? To answer that question just type the words “martial arts”, “kung fu” or “self defense” into YouTube and see how many videos there are. See how many views those videos are getting, read the comments. Feel free to check out both of our channels Enter Shaolin YouTube and Enter Tai Chi YouTube. If you couldn’t learn from online videos, there wouldn’t be so many of them, nor would there be as many people watching them as there are. Think about it.

If you are still not sure if you can learn kung fu online yet, check out our FREE 5 Day Video Course and see if it’s a good fit for you.

See you on the inside,